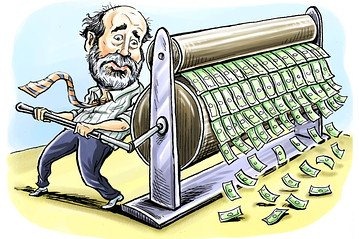 With market participants so concerned over the effects of if/when Bernanke takes his foot off of the QE gas pedal, here comes DB and BusinessInsider to remind us of historical market moves when rates were raised.  Based on monthly historical charts, you will notice a few 10-20% corrections however nothing earth shattering.  The markets found a floor based on true economic demand and continued their uptrend.

As it stands, JPM believes the Fed will not being to taper until their December meeting unless labor improvements continue as they have the last six months; at which point then they look to the September meeting as the most obvious time (after Jackson Hole).

Still, we need to forever bear in mind that markets are forward looking.  With Summer doldrums and money managers prepping for the

ir getaways in the Hamptons, one has to wonder just when markets will begin to bake in a tapering of bond purchases at the very least.  Many eyes are also already watching the 10yr for signs of rising rate as they will rise before the Fed takes action but 1-2 day blips are not a sign of a shift in trend.  Only time will tell.

One thing's for certain.  With front page newspaper headlines in USA Today such as "BULL RUN GETS SOLID FOOTING" and with margin debt skyrocketing you have to ask yourself if a top isn't closer than people realize or than the talking heads on CNBC would lead you to believe.  It's the old saying, when the little guy gets in, it's time to get out.   I say bring it on.  I'm itching to reload on names and establish positions in others - at lower prices.