While main stream media does their level best to keep us hugging our equities, they seem to ignore the fact that quantitative easing ran the market up from 2009 and while the economy has come a long way since the bottom, maybe, just maybe, it's strong enough to sustain us, but not equities at elevated levels.

Federal Reserve officials have signaled they think the economy is robust enough to withstand a round of interest-rate rises starting this year. But the bond market still seems skeptical.

While yields on short-term Treasury notes have started moving higher in anticipation of an interest-rate increase as early as September, yields on longer-term debt have remained stubbornly low. That is a sign that many investors are still doubtful about the health of the economy, and the ability of the Fed to keep raising rates without jeopardizing growth.

On Tuesday, yields on short-term U.S. Treasury notes rose after a Fed official sounded the latest all clear for a rate rise as soon as September. The federal-funds overnight lending target has been near zero since 2008. Short-term yields continued to rise Wednesday.

But the reaction in longer-term bonds was more muted. That left the gap between the yields on two- and 10-year notes at its slimmest level since April.

The collision between rising short-term rates and soft longer-term rates underscores the growing uncertainty about the capacity of the U.S. economy to withstand even a minor rise in borrowing costs, even as Fed officials signal a willingness to consider their first interest-rate increase since 2006.

The Fed raising interest rates against a backdrop of sluggish global growth may be “premature,’’ said Erik Schiller, senior portfolio manager at Prudential Financial Inc.’s fixed-income unit, which has $560 billion in assets under management. Tightening monetary policy “could only help to slow the U.S. economy and pressure inflation expectations down,’’ which would make longer-dated bonds more attractive to buy, he said.

The persistently low yields on longer-term debt has continued to confound many investors who anticipated the 10-year yield may move toward 3% by the end of this year, from 2.211% on Tuesday.

“What I am missing?” asked Jason Evans, co-founder of hedge fund NineAlpha Capital. “The bond market may be telling me something that I am not aware of, such as growth, inflation, China or stocks.”

Mr. Evans says he still expects the 10-year yield to rise to somewhere between 2.5% and 2.75% at the end of the year. But he adds that he would change his views if the yield tumbles more from here.

The yield on the two-year U.S. Treasury note hit 0.728% in late afternoon trading Tuesday, the highest level since June and just shy of the highest this year, and compared with 0.665% on Monday. Yields rise as prices fall. 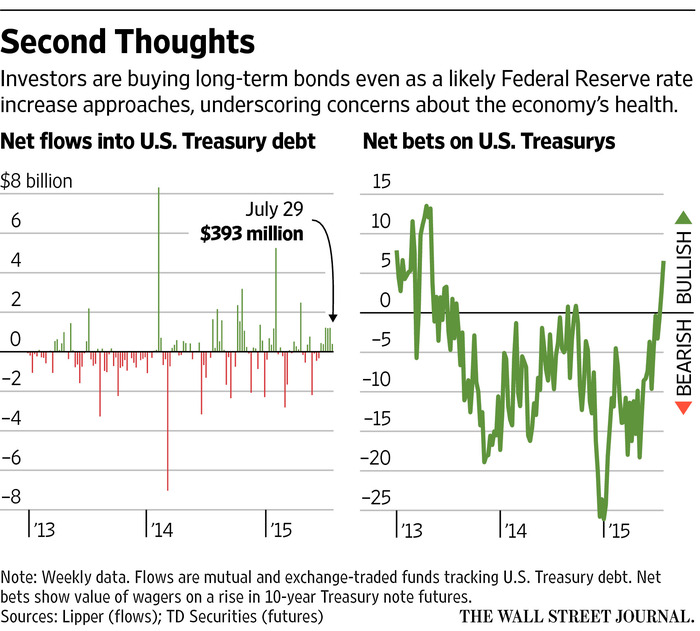 The move came after Federal Reserve Bank of Atlanta President Dennis Lockhart said in an interview with The Wall Street Journal on Tuesday that the economy is ready for the first increase in short-term interest rates in more than nine years. Mr. Lockhart, who is a voter on the Fed’s policy-setting committee this year, said it would take a significant deterioration in the data to convince him not to move in September.

Fed officials signaled in their recent monetary-policy meeting in late July that they were on course to step away from crisis-era monetary stimulus as their outlook for the labor market brightened.

But softer energy prices have been heightening concerns over China’s economy while reducing U.S. inflation expectations. A stronger U.S. dollar is hurting U.S. exports and lowered prices of imported goods. These factors make the Fed more difficult to push up inflation to its 2% target in the medium term.

The 10-year break-even rate, the yield spread between a 10-year Treasury note and a 10-year Treasury inflation-protected security suggests investors expect the U.S. inflation rate to be running at an annualized 1.70% on average within a decade. A month ago it was 1.91%.

Money managers say they aren’t worried about a spike in the 10-year yield because the Fed’s tightening likely will be shallow and slow, baring big upside surprise from either the economic growth or wage inflation.

“I think the Fed can still begin to lift the policy rate from emergency levels at a very slow pace without causing meltdown and panic,” said Christopher Sullivan, who oversees $2.4 billion as chief investment officer at the United Nations Federal Credit Union in New York.

Still, bond investors are mindful of 2014, when bond yields tumbled even as the U.S. outlook improved and the central bank gradually phased out its bond purchases. Instead, sluggish growth overseas and U.S. bonds’ more attractive yields than many other markets sent the 10-year Treasury yield falling during the course of last year.