The deflation scare is back, as Jon Hilsenrath and Brian Blackstone report on the front page of The Wall Street Journal. It’s worth taking a moment to contemplate why deflation is such a bad thing. After all, falling prices sound appealing to consumers, especially compared with the alternative of higher prices.

1. Deflation is a generalized decline in prices and, sometimes, wages. Sure, if you’re lucky enough to get a raise, your paycheck goes further–but those whose wages decline or who are laid off or work fewer hours are not going to enjoy a falling price index.

2. It can be hard (though, as we’ve seen, not impossible) for employers to cut nominal wages when conditions warrant;  it’s easier to give raises that are less than the inflation rate, which is what economists call a real wage cut. And if wages are, as economists say, marked by “downward nominal rigidity,” then employers will hire fewer people.

As Paul Krugman put it in 2010: “in a deflationary economy, wages as well as prices often have to fall–and it’s a fact of life that it’s very hard to cut nominal wages. … What this means is that in general economies don’t manage to have falling wages unless they also have mass unemployment, so that workers are desperate enough to accept those wage declines. See Estonia and Latvia, cases of.”

3. As economic textbooks teach, the prospect that things will cost less tomorrow than they do today encourages people to put off buying. If enough people do that, then businesses are less likely to hire and invest, and that makes everything worse. 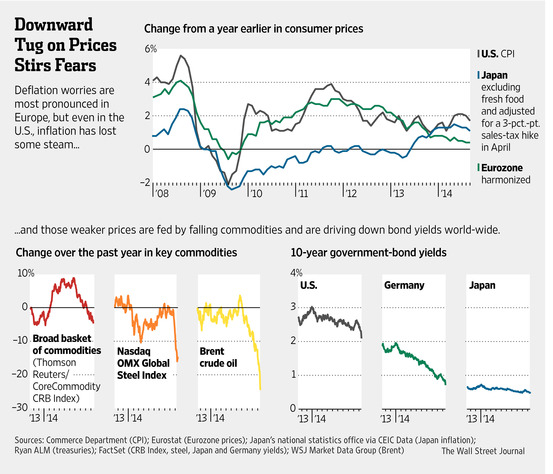 4. Deflation is terrible for debtors. Prices and wages fall, but the value of your debt does not. So you’re forced to cut spending. This applies to consumers and to governments, and it is one of the biggest issues in Europe right now. As Yale University economist Irving Fisher wrote decades ago, debtors are likely to cut spending more than creditors increase it, and this can turn into a really bad downward spiral. (The experience of Japan, though, proves that an economy can have a prolonged period of moderate deflation without falling into that downward spiral.)

Once upon a time,  the U.S. and other economies seemed so prone to inflation that even low rates of inflation didn’t provoke fears of deflation. “Today that belief in an inflationary bias is gone, or at least greatly attenuated,” Berkeley’s Brad DeLong observed in 1999. There are still some people fretting that, given all the money the Fed has pumped into the economy in quantitative easing, inflation is just around the corner. But today, the bigger fear–especially in Europe–is just the opposite.