My simplistic view of the stock market, the one my muddled brain is able to wrap around, is to imagine that of the waterfalls at the Continental Divide at Glacier National Park in Montana.  Numerous rivers, all converging into to one.  Hedge funds, pension funds, investment firms, your own 401k, option flows, you name it.........and share buybacks.

Throughout the recovery, the amount of cash being held on corporate balance sheets was in some instances, astounding, leaving many investors wondering if/when the cash would be deployed.

Well if you haven't noticed, they have been deploying more and more.  Just imagine the many streams you see in this image to the right.  One is M&A which can be the acquisition of a company to compliment ones existing structure OR a direct competitor which is a plus for a stock by making your space that much smaller.  Another stream, a small one, is (hopefully) R&D, another stream represents cash being returned to shareholders via higher dividends and las

Your hear the reassuring echos all of the time.  "Don't worry! The market will always come back."  But do they?  What about dividend reinvesting and adjusted for inflation?  Given the data, one can easily see why smart money continues to invest in bonds, annuities, universal life, etc.  Merely my .02 cents but remember, charts don't lie - people do.

Consider these two overlays — one with the nominal price, excluding dividends, and the other with the price adjusted for inflation based on the Consumer Price Index for Urban Consumers (which I usually just refer to as the CPI). The charts below have been updated through today's close. 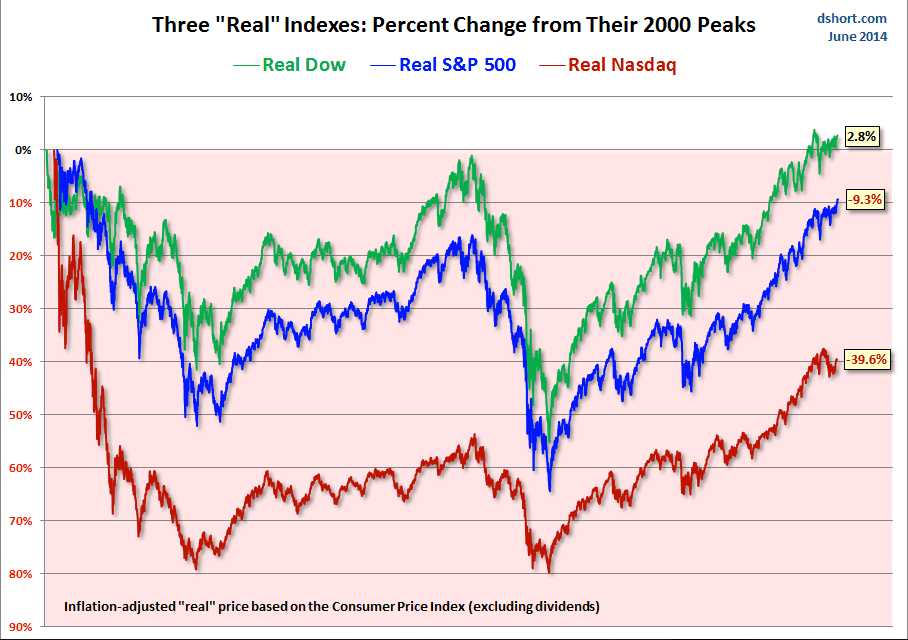 The charts require little explanation. So far the 21st Century has not been especially kind to equity investors. Yes, markets usually do bounce back, but often in time frames that defy optimistic expectations.

The charts above are based on price only. But what about dividends? Would the inclusion of div

Shark Tank's own Kevin O'Leary says he only invests in stocks who pay dividends.

"70% of the returns of the last 40 years have come from cash flow; from dividends."

Beaten-down small-cap stocks could be ready to rally, some say

“If we’re not in an economic recession,

we could see a decent rally in small-cap

strategist at Bank of America Merrill

Small-cap stocks have lost so much

value this year — about 25 percent since

their late-April peak, as measured by the

Sanctis thinks “flat is the new up”: If they

simply end the year where they started,

investors will see about a 13 percent rally

from where they are now. Large-cap

stocks slid about 18 percent in the same

Bank of America sees a 40 percent

chance of recession, he added.

“That’s really the question that people

have to answer for themselves — ‘Do we

Litfin, a portfolio manager at William

Blair who invests in small- and midsiz