Stan Druckenmiller recently elucidated: “Earnings don’t move the overall market; it’s the Federal Reserve Board… focus on the central banks and focus on the movement of liquidity… most people in the market are looking for earnings and conventional measures. It’s liquidity that moves markets.”

Even with the bond market’s muted response to the Federal Reserve’s plan to begin winding down its almost $4.3 trillion portfolio of mortgage and Treasury securities, there are plenty of reasons why the calm probably won’t last.

Out of style for almost a decade, volatility may be on its way back if you take a closer look at the mechanics of the Treasury and mortgage markets. Despite the Fed’s mantra of seeking to carry out its policy shift in a “gradual and predictable manner,” analysts say the effects of ending the reinvestment of the proceeds from maturing securities will still be felt. 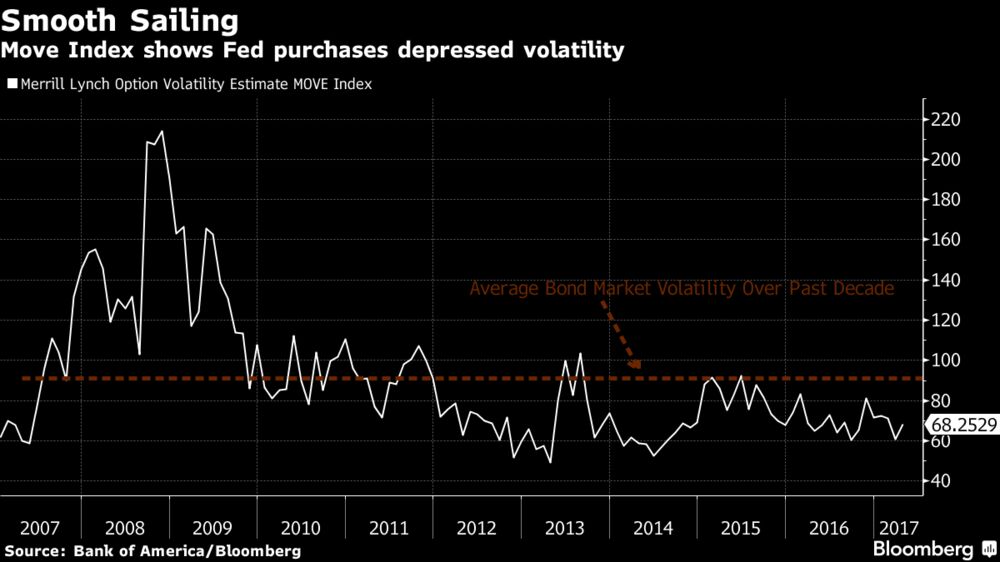 This is the “most highly anticipated event in central-bank history,” said Walter Schmidt, senior vice p

While main stream media does their level best to keep us hugging our equities, they seem to ignore the fact that quantitative easing ran the market up from 2009 and while the economy has come a long way since the bottom, maybe, just maybe, it's strong enough to sustain us, but not equities at elevated levels.

Federal Reserve officials have signaled they think the economy is robust enough to withstand a round of interest-rate rises starting this year. But the bond market still seems skeptical.

While yields on short-term Treasury notes have started moving higher in anticipation of an interest-rate increase as early as September, yields on longer-term debt have remained stubbornly low. That is a sign that many investors are still doubtful about the health of the economy, and the ability of the Fed to keep raising rates without jeopardizing growth.

On Tuesday, yields on short-term U.S. Treasury notes rose after a Fed official sounded the latest all clear for a rate rise as soon as Septembe

Markets being forward looking, I believe we're seeing a snap back ahead of this weeks Jackson Hole meeting (Aug 21-23) where policymakers will discuss at length their thinking around the labor markets of major economies, perhaps dropping clues about the path for monetary policy in the months ahead.

The spotlight will be on Janet Yellen, who will speak on Friday in her first appearance at Jackson Hole as Fed chair.

Most will recall Ben Bernanke two years ago that paved the way for an unprecedented $85 billion per month stimulus plan.

While most don't expect anything spectacular out of the Fed Chairwoman given the improvement in the unemployment rate and overall economy, I have to wonder what will happen after the air is let out of the hopium balloon.  QE is still set to end in October.  Tensions between Russian and Ukraine have sent yields lower.  Whether there is further escalation or a resolution is yet to be seen.  The economy is recovering like a limp noodle, but it is improving.  S

Today during the Fed's testimony to the House Financial Services Committee, Liz Warren waited her turn patiently until the end of the day.  I just love Liz for saying it the way it is.  No holds barred.

Then once done pointing out JPM's notably 15 times more subsidiaries than Lehman, Liz went on to question JPM's resolution plans to remain viable in case of a risk event.  Clearly determined to make one thing crystal clear to the Fed's Janice Yellen, she went on to say..............well, you watch the two minute clip.